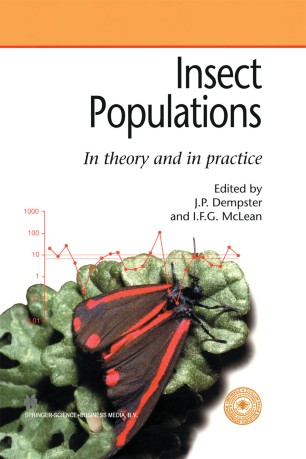 Insect Populations In theory and in practice

Insects are by far the largest group of animals on Earth, with over a million described species, and they occupy a wide range of ecological niches - they may be herbivores, predators, parasites or decomposers. Some are of particular economic importance as pests of agriculture and forestry, as vectors of animal and human disease, or as species of interest to wildlife conservation. Thus an understanding of the processes determining their numbers is of considerable practical value.
Entomologists have played a leading role in developing a theoretical basis to Population Ecology, but we still do not have adequate experimental and observational proof for many of the theoretical ideas that have been proposed. As a result, the subject has been beset with arguments for more than 50 years. This volume attempts to reconcile some of these controversies, while also reviewing the current state of our knowledge. The editors have drawn together an international list of contributors whose views reflect a range of opinions on how natural populations are stabilised. They have succeeded in producing a book that both covers the main alternative views in population theory and contains some of the best recent field studies of insect populations.
This Royal Entomological Society Symposium volume will be of great interest to all entomologists and ecologists, particularly those who wish to know more about Population Dynamics.