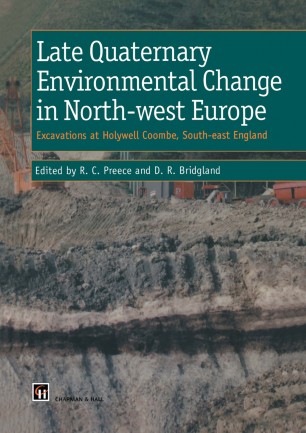 Holywell Coombe, an embayment in the chalk scarp overlooking Folkestone, Kent, was designated a geological Site of Special Scientific Interest in 1985 because it contains richly fossiliferous Late Quaternary sediments providing a unique archive of the last 13,000 years.
The construction of the Channel Tunnel across the Holywell Coombe SSSI brought about a major rescue excavation, funded by Eurotunnel, that set an important precedent in Earth Science conservation. This multidisciplinary investigation has added enormously to our understanding of the environment and natural history of the Late-glacial and Holocene. The climatic complexity of the Late-glacial is recorded in the nature of the sediments, the fossils recovered from them and the soils developed within them.
From the Neolithic, and especially during the Early Bronze Age, the slopes were destabilized as a result of forest clearance, leading to the accumulation of hillwash. Archaeological excavations in the hillwash have revealed evidence of prehistoric occupation and agricultural activity in the coombe.
Eurotunnel also funded biological surveys of the local terrestrial and aquatic habitats. Combining these with the fossil evidence, it has been possible to document the pedigree of our present fauna and flora, providing one of the most detailed and comprehensive studies of its kind. With contributions from eminent Quaternary scientists from several countries, this work will be an important resource for researchers, lecturers and postgraduate students in Quaternary sciences - geology, geography, biology, ecology and archaeology - as well as for government bodies concerned with nature conservation and environmental protection.