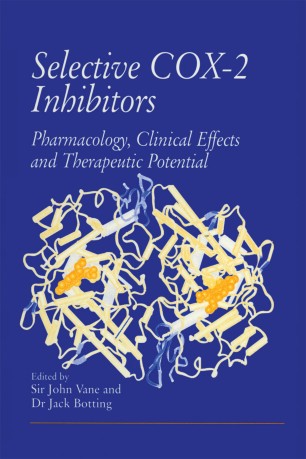 The mainstay of therapy for rheumatoid disease is the non-steroid antiinflammatory drugs (NSAIDs), despite their inherent gastrointestinal toxicity and ability to cause renal damage in susceptible patients. The theory that the beneficial and toxic effects of NSAIDs stem from a reduction in prostanoid production through inhibition of cyclooxygenase implied that particular toxicities were inevitable with NSAIDs and would always be correlated with efficacy. However, over the years, it became apparent that at therapeutic doses, some NSAIDs had greater toxic side-effects than others, a fact not explained by the general theory. A significant clarification arose from the discovery that there are two distinct isoforms of COX, a constitutive enzyme (COX-I) responsible for the production of prostanoids necessary for platelet aggregation and protection of the gastric mucosa and kidney; and an inducible enzyme (COX-2) that is newly synthesized at sites of tissue damage and produces prostaglandins that manifest pathological effects. It became clear that different NSAIDs had greater or lesser effects on COX-I when used in therapeutic doses, explaining the variation in side-effects. ' The elucidation of the crystal structure of these different enzymes and the skills of medicinal chemists have led to the synthesis of new chemicals with a selectivity for the inducible enzyme, and thus with therapeutic efficacy without those toxic effects result­ ing from inhibition of the constitutive enzyme.