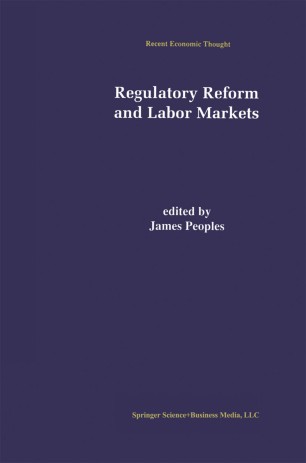 Regulatory reform represents a major shift in the government's role toward price determination in the transportation and telecommunication industries. The resulting policy emphasizes dependence on market forces to set prices and to encourage efficient production techniques. While extensive research investigates the influence of deregulation on prices, profits and productivity, the effect on labor markets has not received the same scrutiny. Firms in these industries are of major importance to business operations in other industries because they provide the critical services of transporting goods and transmitting information. This may partly explain such extensive research on the product market aspects of regulatory reform. Examining labor markets in the transportation and telecommunications industries is also highly warranted, as historically these industries represented some of the most heavily unionized sectors in the economy.
The extent to which regulatory reform has encouraged product market competition may not necessarily result in the same degree of competition across industries. Regulatory Reform and Labor Markets debates the notion that research on regulatory reform and labor markets should develop within the framework of the competitive model. This is achieved by presenting diverging views on wage and employment determination in distinctly different deregulated industries.