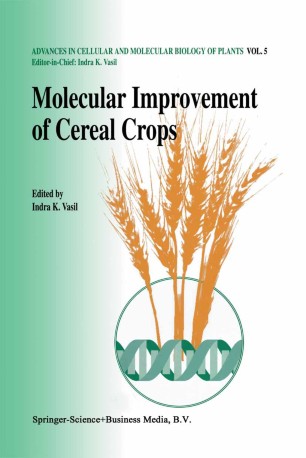 Part of the Advances in Cellular and Molecular Biology of Plants book series (CMBP, volume 5)

From the pre-historic era to modern times, cereal grains have been the most important source of human nutrition, and have helped sustain the increasing population and the development of human civilization. In order to meet the food needs of the 21st century, food production must be doubled by the year 2025, and nearly tripled by 2050. Such enormous increases in food productivity cannot be brought about by relying entirely on conventional breeding methods, especially on less land per capita, with poor quality and quantity of water, and under rapidly deteriorating environmental conditions.
Complementing and supplementing the breeding of major food crops, such as the cereals, which together account for 66% of the world food supply, with molecular breeding and genetic manipulation may well provide a grace period of about 50 years in which to control population growth and achieve sustainable development. In this volume, leading world experts on cereal biotechnology describe the production and commercialization of the first generation of transgenic cereals designed to substantially reduce or prevent the enormous losses to cereal productivity caused by competition with weeds, and by various pests and pathogens, which is an important first step in that direction.