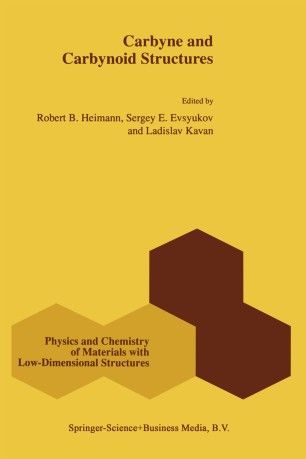 Part of the Physics and Chemistry of Materials with Low-Dimensional Structures book series (PCMALS, volume 21)

1.1. THE DISCOVERY OF CARBYNE Yu.P. KUDRYA VTSEV A.N. Nesmeyanov Institute ofOrganoelement Compounds, Russian Academy of Sciences, 117813 Moscow, Russia Abstract - The history of the discovery of carbyne is briefly recalled. The existence of carbyne was first disclosed by Russian researchers in 1960. It was obtained for the first time via oxidative dehydropolycondensation of acetylene based on the Glaser coupling of ethynyl compounds. 1. Introduction The polymeric nature of carbon was first pointed out by Mendeleev. He wrote: "The molecules of coal, graphite, and diamond are very complicated, and carbon atoms exhibit the capability of binding one to another to form complex molecules in all compounds of carbon. None of the elements possesses an ability of complicating in such an extent as does carbon. There is still no basis to define the polymerization degree of the coal, graphite, or diamond molecules. One should believe, however that they contain en species, where 'n' is a large value" [IJ. Until the 1960s only two allotropic forms of carbon were known, viz., graphite and diamond, including their polymorphous modifications. For a long time 'amorphous carbon' was also included among the simple forms. Presently, however, the structure of amorphous and quasi-amorphous carbons (such as carbon blacks, soot, cokes, glassy carbon, etc.) is known to approach that of graphite to various degrees [2J.