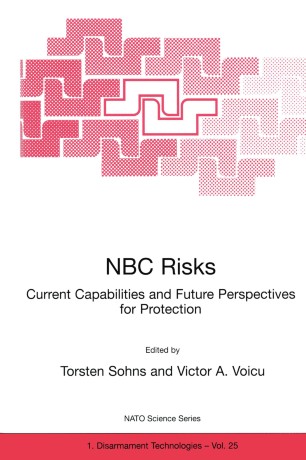 The Advanced Research Workshop in Bucharest from 20. to 22. 04. 1998 covered a broad spectrum of medical and pharmaceutical approaches dealing to maintenaning and restoring of the health of civilians and military personnel exposed to ionizing radiation or biological or chemical agents. The current capabilities and future perspectives for protection against NBC hazards were analyzed from an interdisciplinary perspective. In this context the planning of medical support operations was addressed as were aspects of practical medicine and forwardlooking scientific approaches. The main areas covered were: -general approach and NBC risks -pharmacoprotection and treatment -skin protection and decontamination -pharmaceutical aspects of protectants -environmental aspects of NBC disarmament Acknowledgments The editors would like to express their thanks to NATO for having made this publication possible and all the participants of the conference who contributed their publications. In particular, the editors would like to thank Constantin Mircioiu and his staff for their assistance and support during all stages of the conference and editing. In addition, they are grateful to Harald Kempf and his staff for their editorial assistance in preparing this volume. THE PROLIFERATION OF WEAPONS OF MASS DESTRUCTION: HEALTH RISKS -An Analysisfrom a Medical Perspective- T. SOHNS German Armed Forces Medical Academy Neuherbergstr. II, D -80937 Munich Summary: The proliferation of weapons of mass destruction I and long-range means of delivery continues to be a matter of serious concern as it can pose a direct threat to national and international security.