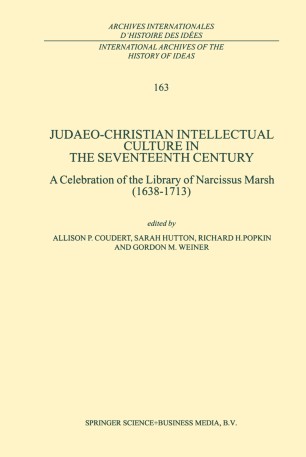 MURIEL MCCARTHY This volume originated from a seminar organised by Richard H. Popkin in Marsh's Library on July 7-8, 1994. It was one of the most stimulating events held in the Library in recent years. Although we have hosted many special seminars on such subjects as rare books, the Huguenots, and Irish church history, this was the first time that a seminar was held which was specifically related to the books in our own collection. It seems surprising that this type of seminar has never been held before although the reason is obvious. Since there is no printed catalogue of the Library scholars are not aware of its contents. In fact the collection of books by late seventeenth and early eighteenth century European authors on, for example, such subjects as biblical criticism, political and religious controversy, is one of the richest parts of the Library's collections. Some years ago we were informed that of the 25,000 books in Marsh's at least 5,000 English books or books printed in England were printed between 1640 and 1700.