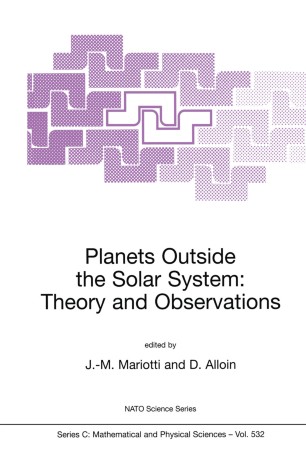 Planets Outside the Solar System: Theory and Observations

The question of the existence of other worlds and other living beings has been present in the human quest for knowledge since as far as Epicurus. For centuries this question belonged to the fields of philosophy and theology. The theoretical problem of the formation of the Solar System, and hence of other planetary systems, was tackled only during the 18th century, while the first observational attempts for a detection started less than one hundred years ago. Direct observation of an extra-solar planetary system is an extraordinarily difficult problem: extra-solar planets are at huge distances, are incredibly faint and are overwhelmed by the bright light of their own stars. With virtually no observational insight to test their models, theoreticians have remained for decades in a difficult position to make substantial progress. Yet, the field of stellar formation has provided since the 1980s both the the­ oretical and observational evidences for the formation of discs at the stage of star birth and for debris materials orbiting the very young stellar systems. It was tempting to consider that these left-overs might indeed later agglomerate into planetary systems more or less similar to ours. Then came observational evidences for planets outside the Solar System.