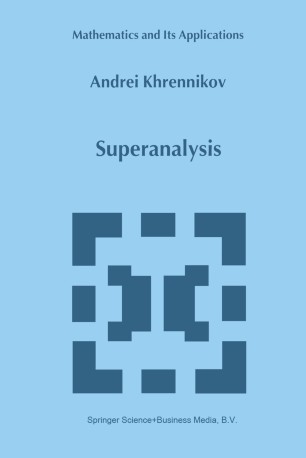 Part of the Mathematics and Its Applications book series (MAIA, volume 470)

defined as elements of Grassmann algebra (an algebra with anticom­ muting generators). The derivatives of these elements with respect to anticommuting generators were defined according to algebraic laws, and nothing like Newton's analysis arose when Martin's approach was used. Later, during the next twenty years, the algebraic apparatus de­ veloped by Martin was used in all mathematical works. We must point out here the considerable contribution made by F. A. Berezin, G 1. Kac, D. A. Leites, B. Kostant. In their works, they constructed a new division of mathematics which can naturally be called an algebraic superanalysis. Following the example of physicists, researchers called the investigations carried out with the use of commuting and anticom­ muting coordinates supermathematics; all mathematical objects that appeared in supermathematics were called superobjects, although, of course, there is nothing "super" in supermathematics. However, despite the great achievements in algebraic superanaly­ sis, this formalism could not be regarded as a generalization to the case of commuting and anticommuting variables from the ordinary Newton analysis. What is more, Schwinger's formalism was still used in practically all physical works, on an intuitive level, and physicists regarded functions of anticommuting variables as "real functions" == maps of sets and not as elements of Grassmann algebras. In 1974, Salam and Strathdee proposed a very apt name for a set of super­ points. They called this set a superspace.