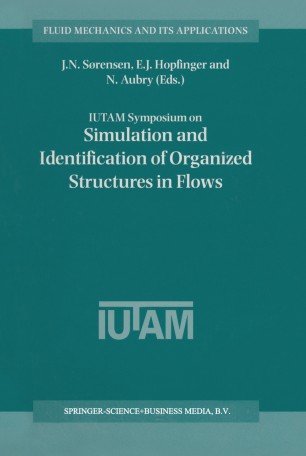 IUTAM Symposium on Simulation and Identification of Organized Structures in Flows

Proceedings of the IUTAM Symposium held in Lyngby, Denmark, 25–29 May 1997

Part of the Fluid Mechanics and Its Applications book series (FMIA, volume 52)

The dynamics of transitional and turbulent flows is often dominated by organized structures with a life-time much longer than a characteristic time­ scale of the surrounding small-scale turbulence. Organized structures may appear as secondary flows as a result of an instability but they persist in turbulent flows. They manifest themselves as eddies or localized vortices and play an important role in e.g. mixing and transport processes. Al­ though the existence of organized structures has been revealed by many experiments and by numerical simulations they are somewhat elusive, as there is no consensus on how to define them and technically how to detect them. In recent years several identification tools for analysing complex flows have been developed. These tools include various versions of the Proper Orthog­ onal Decomposition (POD) technique, wavelet transforms, pattern recogni­ tion, etc. At the same time, improvements in experimental techniques have made available data that further necessitate efficient detection methods. A prominent example is the Particle Image Velocimetry (PIV) technique from which complex spatio-temporal flow data can be obtained. An interesting feature of some of the identification techniques is that they form the basis for reduced models by which dynamical processes can be studied in details. From studies of dissipative dynamical systems it has been revealed that, in phase space, transitional and turbulent flows can be identified by their low-dimensional behaviour. Thus, employing data from experiments or nu­ merical simulations to form modes residing on finite-dimensional attractors may dramatically reduce computing costs.