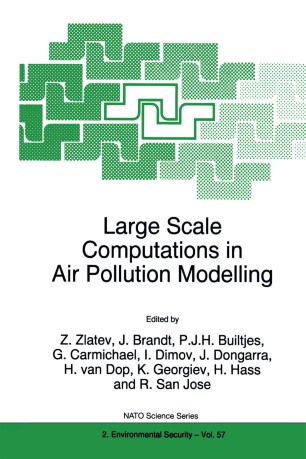 1. Contents of these proceedings. These proceedings contain most of the papers which were presented at the NATO ARW (Advanced Research Workshop) on "Large Scale Computations in Air Pollution Modelling". The workshop was held, from June 6 to June to, 1998, in Residence Bistritza, a beautiful site near Sofia, the capital of Bulgaria, and at the foot of the mountain Vitosha. 2. Participants in the NATO ARW. Scientists from 23 countries in Europe, North America and Asia attended the meeting and participated actively in the discussions. The total number of participants was 57. The main topic of the discussions was the role of the large mathematical models in resolving difficult problems connected with the protection of our environment. 3. Major topics discussed at the workshop. The protection of our environment is one of the most important problems facing modern society. The importance of this problem has steadily increased during the last two-three decades, and environment protection will become even more important in the next century. Reliable and robust control strategies for keeping the pollution caused by harmful chemical compounds under certain safe levels have to be developed and used in a routine way. Large mathematical models, in which all important physical and chemical processes are adequately described, can successfully be used to solve this task.