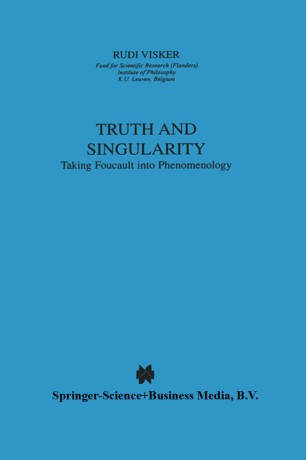 THE PART OF THE SUBJECT At the origin of these essays, an increasing weariness produced by all those attempts to oppose what came to be known as Foucault's 'post­ structuralism' to phenomenology - as if the two were incompatible and as if one could only proceed with thought after having chosen sides. And an equal reluctance to join those who pretended they could carryon as they had before since, quite obviously, there were no sides to choose, 'Foucault' being but the latest example of a relativism that one could easily ignore since it had, like all relativism, already refuted itself by daring to speak. And, finally, behind that weariness and that reluctance, a suspicion that what these two reactions to 'Foucault' had in common was a refusal to go 'toward the things themselves' and thus a refusal to approach the texts that we refer to by that proper name as we would approach other phenomena: not as the body-object of a thought that we would have to locate as coming either 'before' or 'after' phenomenology, but as a series of statements that appear to us in a certain way and whose appearing reveals to us something about our own, finite being.