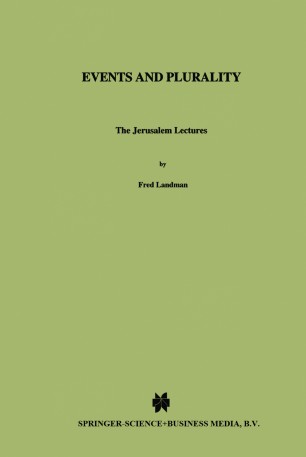 Part of the Studies in Linguistics and Philosophy book series (SLAP, volume 76)

JERUSALEM LECTURES In 1992, I was a Lady Davis Fellow in the English Department at the Hebrew Univer­ sity of Jerusalem. In the context of this, Edit Doron asked me to present a series of weekly evening lectures. The idea was that I would be talking about my own current research on plurality in an event based theory, without the restraints that a nonnal seminar fonnat would im­ pose: i.e. the idea was that I would actually get to the part where I would talk about my own work. At the same time, Edit added, it would be nice if, rather than just presupposing or presenting a neo-Davidsonian framework to develop my analysis of plurality, I could provide a more general setting of the problems by discussing in some depth the archi­ tecture of event arguments and thematic roles. In particular, Terry Parsons' book, Par­ sons 1990, had appeared relatively recently, and there was real interest among the audience in discussing Parsons' arguments for events and roles.