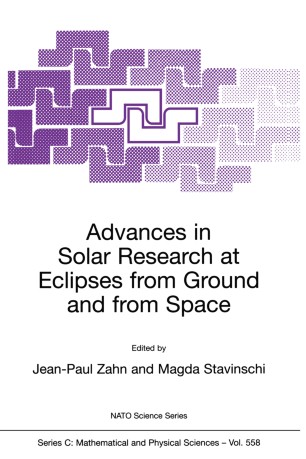 Advances in Solar Research at Eclipses from Ground and from Space

Proceedings of the NATO Advanced Study Institute on Advances in Solar Research at Eclipses from Ground and from Space Bucharest, Romania 9–20 August, 1999

The aim of this Advanced Study Institute was to give an account on the most recent results obtained in solar research. Bucharest was chosen to host it, because the capital city of Romania was located right in the middle of the totality path of the last eclipse of the millennium, on 11th August 1999; furthermore the phenomenon was close to reach there its longest duration: 2m 23s. Such a total eclipse is not only a very spectacular event which draws the crowds: to astronomers, solar eclipses still offer the best conditions for observing the lower part of the corona. The Sun plays a crucial role in our very existence. It was responsible for the formation of the Earth, and rendered this planet fit to host living beings, providing the right amount of heat, and this for a long enough span of time. Quite understandably, it has always been a prime target of human curiosity, and more recently one of scientific investigation. During the last century, it was realized that the Sun is a star like billions of others; we learned since that it draws its energy from the nuclear fusion of hydrogen, and we are now able to estimate its age and life expectancy.