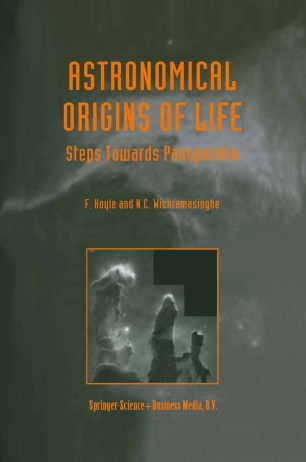 Living material contains about twenty different sorts of atom combined into a set of relatively simple molecules. Astrobiologists tend to believe that abiotic mater­ ial will give rise to life in any place where these molecules exist in appreciable abundances and where physical conditions approximate to those occurring here on Earth. We think this popular view is wrong, for it is not the existence of the building blocks of life that is crucial but the exceedingly complicated structures in which they are arranged in living forms. The probability of arriving at biologically significant arrangements is so very small that only by calling on the resources of the whole universe does there seem to be any possibility of life originating, a conclusion that requires life on the Earth to be a minute component of a universal system. Some think that the hugely improbable transition from non-living to living mat­ ter can be achieved by dividing the transition into many small steps, calling on a so-called 'evolutionary' process to bridge the small steps one by one. This claim turns on semantic arguments which seek to replace the probability for the whole chain by the sum of the individual probabilities of the many steps, instead of by their product. This is an error well known to those bookies who are accustomed to taking bets on the stacking of horse races. But we did not begin our investigation from this point of view.