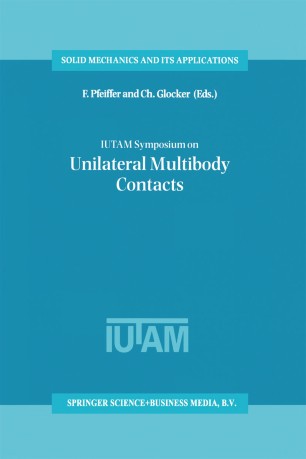 Proceedings of the IUTAM Symposium held in Munich, Germany, August 3–7, 1998

Part of the Solid Mechanics and its Applications book series (SMIA, volume 72)

Multibody dynamics started with the ideas of Jacob and Daniel Bernoul­ li and later on with d'Alembert's principle. In establishing a solution for the problem of the center of oscillation for a two-mass-pendulum Jacob Ber­ noulli spoke about balancing the profit-and-Ioss account with respect to the motion of the two masses. Daniel Bernoulli extended these ideas to a chain pendulum and called forces not contributing to the motion "lost forces", thus being already very close to d'Alembert's principle. D'Alembert considered a "system of bodies, which are interconnected in some arbitrary way. " He suggested separating the motion into two parts, one moving, the other being at rest. In modern terms, or at least in terms being applied in engineering mechanics, this means that the forces acting on a system of bodies are split into active and passive forces. Active forces generate motion, passive forces do not; they are a result of constraints. This interpretation of d'Alembert's principle is due to Lagrange and up to now has been the basis of multi body dynamics (D' Alembert, Traite de Dynamique, 1743; Lagrange, Mecanique Analytique, 1811). Thus, multibody dynamics started in France. During the nineteenth century there were few activities in the multi body field even though industry offered plenty of possible applications and famous re­ presentatives of mechanics were aware of the problems related to multibody dynamics. Poisson in his "Traite de Mecanique" (Paris 1833) gave an im­ pressive description of these problems, including impacts and friction.