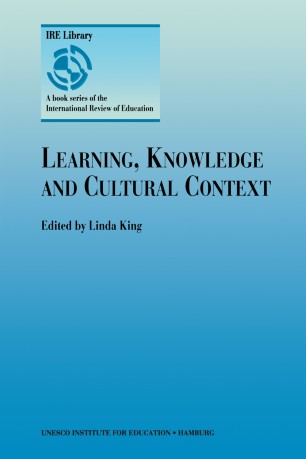 This special issue of the International Review of Education includes contri­ butions on indigenous knowledge, the cultural context of learning and on the interplay between the so-called "traditional" and "modern" ways of educa­ tion. It starts from the assumption that cultures are not static, that they are shifting and mutating, and that the Western need to encapsulate "other cultures", which found its most extreme form in their being frozen in time and boxed behind glass in museums of ethnology, has distorted our under­ standing of the way in which different cultures create, recreate and repro­ duce knowledge. The basic premise of this position is that there is no such thing as a pure culture, and that all cultures borrow, lend, adapt, and distort distinct elements from other cultures. All cultures, moreover, provide their members with ways of learning about that culture, which include elements such as language, forms of social organisation, and ritual spaces for the trans­ mission of specialised knowledge. Meaning may be shifted over time, but that in itself is a product of the passage of knowledge through history. Indeed, much meaning is cyclical and reinterpretive so that cultures may look back to a mythological past which they assumed gave them their essential identity but which may be part fact, part fantasy, and part fiction. This is then rein­ terpreted in the light of changed and changing historical circumstances.