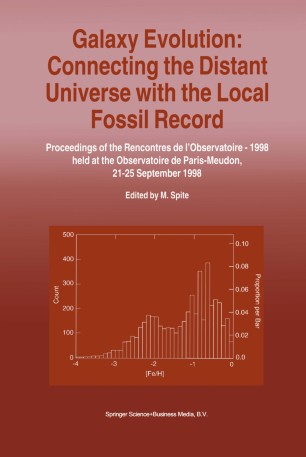 Proceedings of a Colloquium held at the Observatoire de Paris-Meudon from 21–25 September, 1998

This book contains the Proceedings of the first 'Rencontres de l'Observatoire' which was held at the Meudon campus of the Paris Observatory on September 21-25, 1998. The subject addressed was 'Galaxy evolution: Connecting the distant Universe with the local fossil record'. This colloquium was a project devised by a group of astronomers who, in France but also in Europe, in the United States, in South America, and even in Japan, have worked for a long time with Roger and Giusa Cayrel. Roger and Giusa had a tremendous influence on us all. They taught us in their discrete way, the care of the observations and the rigor in the interpretation. Besides the presentations of Jun Jugaku and Rene Racine and the presentation of Pierre Couturier of the story of the Canada-France-Hawaii Telescope (presentation which unfortunately does not appear in this book) several papers refer to the role of Roger and Giusa in astronomy. Their contribution to the study of the galactic evolution has been fundamental. Our Milky Way is the galaxy which can be studied in most details. From the study of our Galaxy's old population, one can understand what our Milky Way was like very soon after its birth, at the same stage where we now observe the very distant and thus very 'young' galaxies. The organizers wanted to bring together with Roger and Giusa Cayrel experts of the old Galactic Population, of the distant galaxies and of the galactic evolution.