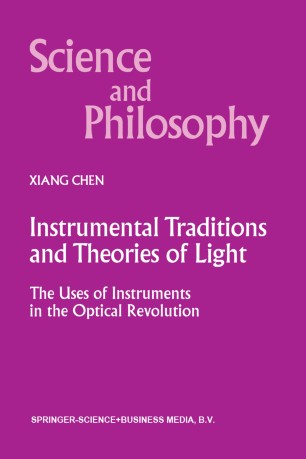 Instrumental Traditions and Theories of Light

The Uses of Instruments in the Optical Revolution

Part of the Science and Philosophy book series (SCPH, volume 9)

An analysis of the optical revolution in the context of early 19th century Britain. Far from merely involving the replacement of one optical theory by another, the revolution also involved substantial changes in instruments and the practices that surrounded them. People's judgements about classification, explanation and evaluation were affected by the way they used such optical instruments as spectroscopes, telescopes, polarisers, photometers, gratings, prisms and apertures. There were two instrumental traditions in this historical period, each of which nurtured a body of practice that exemplified how optical instruments should be operated, and especially how the eye should be used. These traditions functioned just like paradigms, shaping perspectives and even world views.
Readership: Scholars and graduate students in the history of science, history of instrument, philosophy of science and science studies. Can also be used as a textbook in graduate courses on 19th century physics.