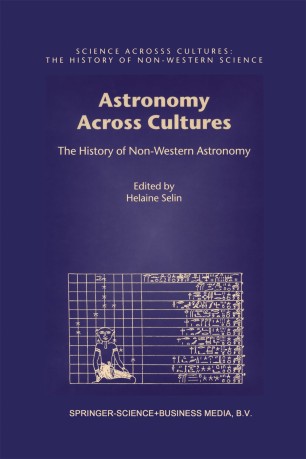 The History of Non-Western Astronomy

Part of the Science Across Cultures: The History of Non-Western Science book series (SACH, volume 1)

Astronomy Across Cultures: A History of Non-Western Astronomy consists of essays dealing with the astronomical knowledge and beliefs of cultures outside the United States and Europe. In addition to articles surveying Islamic, Chinese, Native American, Aboriginal Australian, Polynesian, Egyptian and Tibetan astronomy, among others, the book includes essays on Sky Tales and Why We Tell Them and Astronomy and Prehistory, and Astronomy and Astrology. The essays address the connections between science and culture and relate astronomical practices to the cultures which produced them. Each essay is well illustrated and contains an extensive bibliography. Because the geographic range is global, the book fills a gap in both the history of science and in cultural studies. It should find a place on the bookshelves of advanced undergraduate students, graduate students, and scholars, as well as in libraries serving those groups.

`This book has wide-ranging essays on the astronomies of the ancient world (other than Greek and Mesopotamian which are traditionally taken to be the forerunners of Western astronomy). The book is steeply priced, but it is worth it.'
from: Amazon.com
`Recommended.'
Choice, 38:10 (2001)
`...it is a distinct pleasure to read the book from beginning to end.'
Mathematical Reviews, 2002c
`Astronomy across Cultures is a good resource for advanced students or faculty members who wish to learn of non-Western astronomical thought. The editor has assembled a coherent collection of chapters covering a wide variety of cultures and time periods. This work greatly expands the scope and coverage of the Encyclopaedia of the History of Science, Technology, and Medicine in Non-Western Cultures, ed. by Helaine Selin, from the same publisher (CH, Jan'98). Substantial chapter bibliographies; very good index.'
Choice, June 2001
Buy options