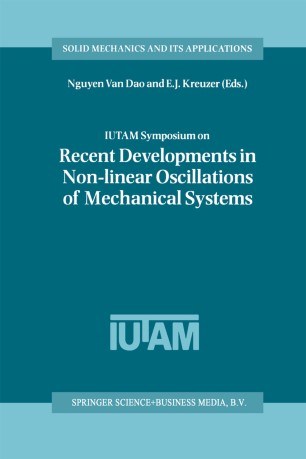 Proceedings of the IUTAM Symposium held in Hanoi, Vietnam, March 2–5, 1999

Part of the Solid Mechanics and Its Applications book series (SMIA, volume 77)

This volume contains selected papers presented at the Symposium on "Recent Developments in Non-linear Oscillations of Mechanical Systems", held in Hanoi, Vietnam, from 2 - 5 March 1999. This Symposium was initiated and sponsored by the International Union of Theoretical and Applied Mechanics (lUI AM) and organised in conjunction with Vietnam National University, Hanoi. Ihe purpose of the Symposium was to bring together scientists active in different fields of oscillations with the aim to review the recent progress in theory of oscillations and engineering applications and to outline the prospects in its further achievements to then co-ordinate and direct research in this field to further co-operation between scientists and various scientific institutions. An International Scientific Committee was appointed by the Bureau of IUI AM with the following members: Nguyen Van Dao (Vietnam, Co-Chairman) E.J. Kreuzer (Germany, Co-Chairman) D.H. van Campen (The Netherlands) F.L. Chernousko (Russia) A.H. Nayfeh (U.S.A) Nguyen Xuan Hung (Vietnam) W.O. Schiehlen (Germany) J.M.T. Thompson (U.K) Y. Veda (Japan). This Committee selected the participants to be invited and the papers to be presented at the Symposium. As a result of this procedure, 52 active scientists from 16 countries responded to the invitation, and 42 papers were presented in lecture and poster discussion sessions.