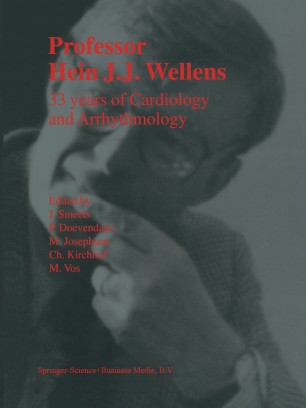 33 Years of Cardiology and Arrhythmology

The first invasive evaluation of cardiac arrhythmias in humans was performed in 1967 in Paris (Prof. P. Coumel) and Amsterdam (Prof. D. Durrer). This was the start of a rapid increase in our knowledge of the diagnosis, mechanism and treatment of cardiac arrhythmias. In that same year Prof. Hein J.J. Wellens became cardiologist in the Wilhelmina Gasthuis in Amsterdam. Initially in Amsterdam (1967-1977) and later on in Maastricht (from 1977), he was the driving force for many breakthroughs in clinical cardiac electrophysiology. With an active interplay between the knowledge derived from the 12-lead electrocardiogram and the recordings made with invasive electrophysiology, he composed new ideas leading to major contributions in clinical cardiac electrophysiology and, more generally, in arrhythmology. He published over 650 scientific papers and 14 books, and had numerous functions within scientific boards of prestigious journals. In addition he trained more than 120 cardiologists in clinical cardiac electrophysiology.
On the occasion of the congress `2000, Future of Arrhythmology: Lessons From the Past, Promises For Tomorrow', we highlight the scientific work of Prof. Hein J.J. Wellens. A selection of more than 60 articles over the whole time span has been selected. These articles are accompanied by comments from an expert, co-worker and/or former fellow in order to place the paper in a scientific time frame, including the relationship of the author with Prof. Hein J.J. Wellens.