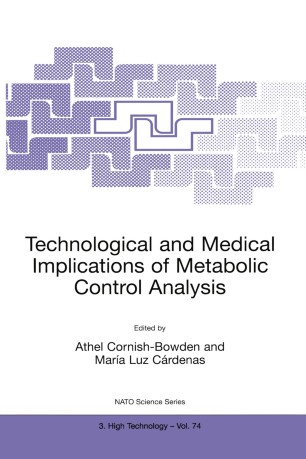 Two decades have passed since the mechanisms of protein synthesis became well enough understood to permit the genetic modification oforganisms. An impressive amount of new knowledge has emerged from the new technology, but much ofthe promise of20years ago has notyet been fulfilled. In biotechnology, efforts to increase the yields of commercially valuable metabolites have been less successful than ex­ pected, and when they have succeeded it has often been as much from selective breeding as from new methods. The cell is more complicated than what is presented in the classical teaching of biochemistry, it contains more structure than was dreamed of 20 years ago, and the behaviour ofany systemofenzymes is more elaborate than can be explained in terms ofa single supposedly rate-limiting enzyme. Even if classical enzymology and meta­ bolism may have seemed rather unfashionable during the rise ofmolecular biology, they remain central to any modification ofthe metabolic behaviour oforganisms. As such modification is essential in much ofbiotechnology and drug development, bio­ technologists can only ignore these topics at their peril.