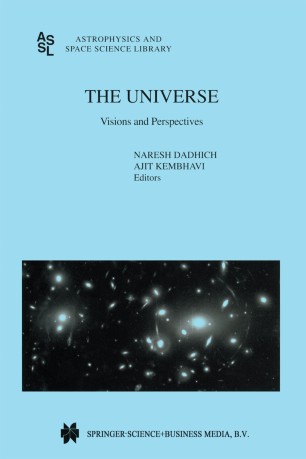 It is with great joy that we present a collection of essays written in honour of Jayant Vishnu Narlikar, who completed 60 years of age on July 19, 1998, by his friends and colleagues, including several of his for­ mer students. Jayant has had a long research career in astrophysics and cosmology, which he began at Cambridge in 1960, as a student of Sir Fred Hoyle. He started his work with a big bang, expounding on the steady state theory of the Universe and creating a new theory of gravity inspired by Mach's principle. He also worked on action-at-a-distance electrodynamics, inspired by the explorations of Wheeler, Feynman and Hogarth in that direction. This body of work established Jayant's rep­ utation as a bold and imaginative physicist who was ever willing to take a fresh look at fundamental issues, undeterred by conventional wis­ dom. This trait, undoubtedly inherited from his teacher and mentor, has always remained with Jayant. It is now most evident in his untir­ ing efforts to understand anomalies in quasar astronomy, and to develop the quasi-steady state cosmology, along with a group of highly distin­ guished astronomers including Halton Arp, Geoffrey Burbidge and Fred Hoyle. In spite of all this iconoclastic activity, Jayant remains a part of the mainstream; he appreciates as well as encourages good work along conventional lines by his students and colleagues. This is clear from the range of essays included in this volume, and the variety and distribution of the essayists.