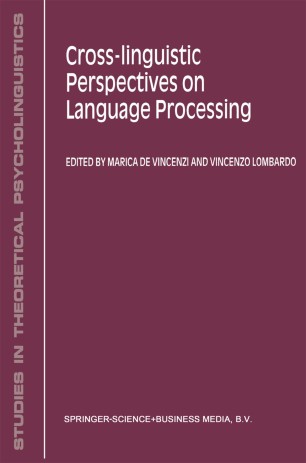 Recent studies in psycho linguistics have ranged through a variety of languages. In this trend, which has no precedent, studies in language processing have followed studies in language acquisition and theoretical linguistics in considering language universals in a broader scope than only in English. Since the beginning of the century, studies in language acquisition have produced a vast body of data from a number of Indoeuropean languages, and the emphasis on the universal has preceded the emphasis on the particular (see (Slobin 1985) for a review). Nowadays, the research in the field advances by means of a continuous linking between the cross-linguistic uniformities and the individual language influences on development. The level of language universals is continuously refined as the data from a number of languages contribute to the elaboration of a more distinctive picture of the language of children. The first cross-linguistic studies in theoretical linguistics appeared at the end of the seventies. Within the Chomskian paradigm, the reference to the Romance languages caused a shift from a rule-based toward a principle-based formalism (Chomsky 1981, 1995); within alternative theories, the reduced prominence of the pure phrase structure component in favor of the lexicon and/or the functional relations (see, e.g., Lexical Functional Grammar (Bresnan 1982), Relational Grammar (Perlmutter 1983)) sought empirical support in languages exhibiting deep structural differences with respect to English (e.g. Bantu, Malayalam, Romance and Slavic languages Warlpiri). The M. De Vincenzi and V. Lombardo (eds.), Cross-linguistic Perspectives on Language Processing, 1-19.