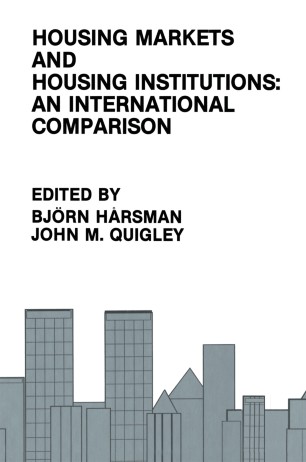 International comparisons of economic institutions and government poli­ cies are fraught with difficulties. After1he selective barriers of language and culture are overcome, differences in programs and outcomes are far more subtle than those that can be revealed by highly aggregated national data. Rela­ tively "soft" comparisons are the norm in international comparative research. This is particularly true in comparative analyses of housing and the operation of housing markets. Housing markets are local or regional in character, and the effects of government programs on market outcomes depend upon important economic characteristics of the local environment. Moreover, the institutions that influence the production, distribution, and consumption of housing differ enormously across nations. The distribution of housing and the role of the market in provision depend upon historical and social factors as well. Aggregate national data are unlikely to allow for much depth in comparisons across societies. Yet in the absence of such comparisons, the very visibility of housing may lead to inadequate or erroneous generalizations. Photographs emphasing the aesthetics of ''well­ planned" housing agglomorations or urban slums are compelling. Documen­ tation that middle-class households must wait in a queue for a decade to be housed is notably less graphic.