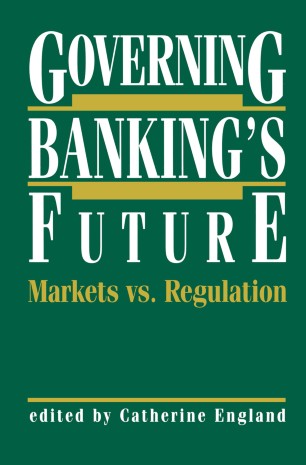 Part of the Innovations in Financial Markets and Institutions book series (IFMI, volume 5)

Risk-based capital standards presume a need for common capital standards across countries. The details of forging an agreement were left to the staffs of the primary bank regulators in each country, and compromises were inevitable. Although domestic constituencies' reactions to the proposals were invited, the arduous negotiations that led to the proposals generated intense pressure on the principals not to make changes. The European Community's approach to financial integration seems to be driven by a political desire to achieve an integrated market within Europe, despite significant institution al differences among countries. Underlying that desire is a belief that the market pressures that result from different regulatory systems operating in the same market will produce the right answer . The financial provisions of the U .S.-Canada free-trade agreement take a direction that, in my judgment, is more productive. The provisions are more limited in scope than are those of the European initiative. National treatment and national sovereignty are preserved. However, the delicate issue of national responsibility for failing institutions, and its relationship to monetary policies, is not addressed. A Better Alternative A productive basis for international regulation can be formulated around three principles: 1. free entry for foreign-owned subsidiaries chartered under the laws of the host country; 2. national treatment for those subsidiaries; and 3. national responsibility for (a) monetary policy, (b) prevention of unwarranted financial panics in domestically chartered institutions, whether foreign or domestically owned, and (c) supervision of all domestically chartered institutions, regardless of ownership.