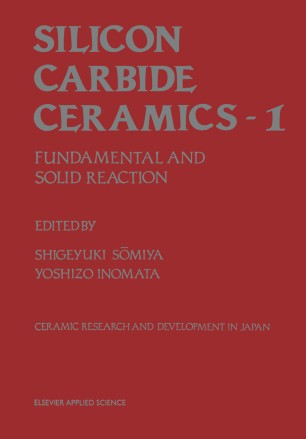 Discovered by Edward G. Acheson about 1890, silicon carbide is one of the oldest materials and also a new material. It occurs naturally in meteorites, but in very small amounts and is not in a useable state as an industrial material. For industrial require­ ments, large amounts of silicon carbide must be synthesized by solid state reactions at high temperatures. Silicon carbide has been used for grinding and as an abrasive material since its discovery. During World War II, silicon carbide was used as a heating element; however, it was difficult to obtain high density sintered silicon carbide bodies. In 1974, S. Prochazka reported that the addition of small amounts of boron compounds and carbide were effective in the sintering process to obtain high density. It was then possible to produce high density sintered bodies by pressureless sintering methods in ordinary atmosphere. Since this development, silicon carbide has received great attention as one of the high temperature structural ceramic materials. Since the 1970s, many research papers have appeared which report studies of silicon carbide and silicon nitride for structural ceramics.