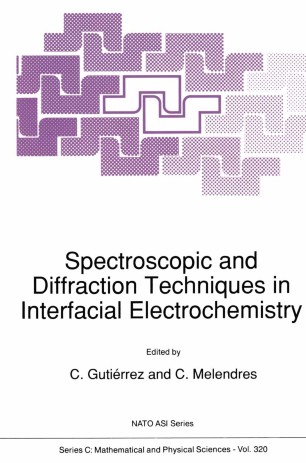 Electrochemistry is one of the oldest branches of Physical Chemistry. Having its foundations in the work of Faraday, Arrhenius and others, it evolved from the study of transport in electrolyte solutions to that of electrode kinetics. Kinetic methods are inherently unable to identify unequivocally the species involved in a reaction. Therefore, beginning in the 70s many spectroscopic and diffraction techniques were applied to the study of the electrode-electrolyte interface, in order to identify intermediary reaction species, and even the spatial arrangement of atoms or molecules at the interface. In order to disseminate these techniques, a NATO Advanced Sutdy Institute was held at Puerto de la Cruz, Tenerife (Canary Islands, Spain) from July 2 to 15, 1988. The Institute consisted of tutorial type lecutures, poster sessions, and round-table discussions. It was attended by over 65 participants from NATO-member countries, and others from Argentina and Japan. In the present volume most of the lectures presented at the Institute have been collected. At least one chapter is devoted to each technique. Emphasis has been made on case studies, rather than theory, which can be found in textbooks and other publications. Our purpose in this book is to help the electrochemists uninitiated in spectroscopic methods to decide which techniques would be suitable for application to their particular problems. We thank all the lecturers who contributed to this volume, and even those UHPs (Unrepentant Habitual Procrastinators) who did not in spite of our urgings to do so.