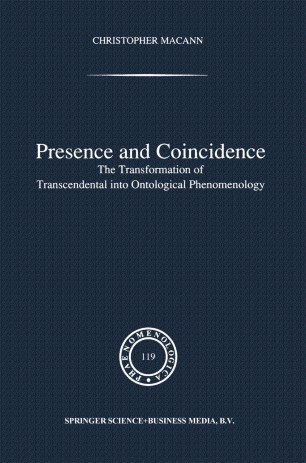 The Transformation of Transcendental into Ontological Phenomenology

For some twenty years now, I have been working on a philosophical programme which falls into two parts, a systematic metaphysics, to be entitled Being and Becoming, conceived in the general framework of ontological phenomenology, but employing what I call a 'genetic' methodol­ ogy, and an historical interpretation, designed to support and confirm the ontological philosophy in question. The historical part of the overall programme was originally conceived in the form of an Epochal Interpretation of the history of modern philosophy from Descartes on. Part of the material accumulated towards such an Epochal Interpretation has however been deployed rather differently. First, the Kant material has already been turned into an interpretive transforma­ tion of Kant's Critical Philosophy. Second, the material on Husserl' s Phenomenological Philosophy now forms the basis of the present study. The interpretive transformation of Kant's Critical philosophy was published by Winter Verlag in the context of a Humboldt fellowship. In that work, I took Heidegger's Kant and the Problem of Metaphysics as my model. Like Heidegger, I subjected the Critical Philosophy to an interpre­ tive procedure as a result of which I finished up with structures matching and reflecting the basic structures of my own (genetic) ontology. But I sought to overcome certain limitations inherent in the Heideggerian project.