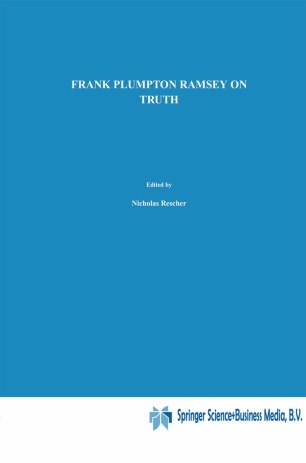 The present publication forms part of a projected book that F. P. Ramsey drafted but never completed. It survived among his papers and ultimately came into the possession of the University of Pittsburgh in the circumstances detailed in the Editor's Introduction. Our hope in issuing this work at this stage - some sixty years after Ramsey's premature death at the age of 26 - is both to provide yet another token of his amazing philosophical creativity, and also to make available an important datum for the still to be written history of the development of philosophical analysis. This is a book whose appearance will, we hope and expect, be appreciated both by those interested in linguistic philosophy itself and by those concerned for its historical development in the present century. EDITORS'INTRODUCTION 1. THE RAMSEY COLLECTION Frank Plump ton Ramsey (22 February 1903 -19 January 1930) was an extra­ ordinary scholarly phenomenon. Son of a distinguished mathematician and President of Magdalene College, Cambridge and brother of Arthur Michael, eventual Archbishop of Canterbury, Ramsey was closely connected with Cambridge throughout his life, ultimately becoming lecturer in Mathematics in the University. Notwithstanding his great mathematical talent, it was primarily logic and philosophy that engaged his interests, and he wrote original and important contributions to logic, semantics, epistomology, probability theory, philosophy of science, and economics, in addition to seminal work in the foundations of mathematics.