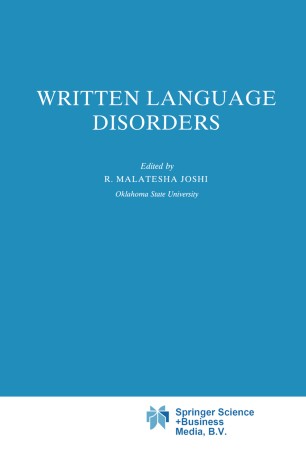 Part of the Neuropsychology and Cognition book series (NPCO, volume 2)

Although anecdotal reports of loss of once-acquired reading ability was noticed in the individuals who had sustained brain damage as early as the year AD. 30, systematic enquires of alexia were not undertaken until the latter part of the nineteenth century. The two anatomo-pathological studies carried out by Dejerine in 1891 and 1892 mark the beginning of scholarly investigation of reading failure. Interestingly, the study of de­ velopmental reading disability also began to receive attention at about the same time when Pringle Morgan described the case of a 14-year-old boy who had great difficulty in reading and writing. Since then sporadic reports of developmental reading-writing failure began to appear in medi­ cal and educational journals even though such investigation went on at an unhurried pace. In the past two decades, however, the situation has changed enormously and hundreds of articles that have investigated developmental and acquired cognitive disabilities have been published. Disorders of spoken language and written language are two areas that have been extensively addressed by these articles. Those who study disorders of language come from a wide variety of backgrounds and their reports are also published in a variety of journals. The purpose of the present volume is to bring some important research findings of written language disorders together and present them in a coherent format. In Chapter 1, Joshi and Aaron challenge the validity of the notion of the putative "poor speller but good reader'.