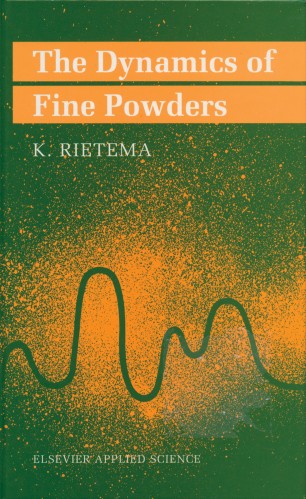 The Dynamics of Fine Powders

flour, potato starch, cracking catalyst, sand, and gravel, one will probably agree that the first four materials definitely are powders and the last one certainly is not. Whether one would call sand a powder probably depends on the partiele size and on personal Vlews. When the astronaut Neil Armstrong returned to the Earth from his trip on the surface of the Moon, he stated: 'The surface is fine and powdery. I can kick it up loosely with my toe. It does adhere in fine layers like powdered charcoal to the sole and inside of my boots. I only go in a small fraction of an inch, but I can see the footprints of my boots and the treads in the fine sandy partieles. ' These words elearly show that the behaviour of powders de­ pends on the circumstances. In wh at respects are those on the Moon different from those on the Earth? (1) The gravitational force on the surface of the Moon is only one-sixth of that on the Earth. (2) There is no gas on the Moon. The latter aspect means that any water brought there would evaporate and disappear immediately, hence powders on the Moon will always be perfect1y dry so that cohesion between the separate partieles due to liquid bridges will be zero.