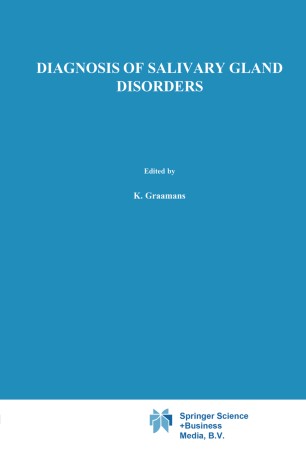 Historically, disorders of salivary glands tend to be 'underdiagnosed and overtreated'. In the vast body of literature on this subject, emphasis has usually been put on therapeutic modalities of various diseases of the salivary glands. Whereas therapy and pathology have been treated in numerous thorough studies, the (patho )physiology of the salivary glands has remained rather poorly understood. Even less attention has been given to the diagnostic methods. Until a few decades ago, diagnosis consisted mainly of a clinical examin­ ation which included the patient's history, inspection, and palpation. These methods remain crucial, but a variety of new diagnostic tools have appeared since then. Their clinical value is still subject to controversy; each method has its advocates and opponents. The indications for enrolling a patient at a given point in a series of diagnostic procedures are interpreted differently. One of the most striking examples is the use of sialography. This has become a classic diagnostic procedure. Although sialography is still a useful method, it has considerable disadvantages, limitations, and even contraindications. In the major teaching hospitals, residents still tend to consider sialography as a panacea for the majority of their diagnostic problems, whereas the infor­ mation provided is actually rather restricted. Other modern methods such as CT and MRI have taken over the role of sialography to a certain extent. This also applies to ultrasonography and scintigraphy. Moreover, microbiol­ ogy, sialometry, sialochemistry, cytology, and histopathology may give super­ ior information in certain cases.