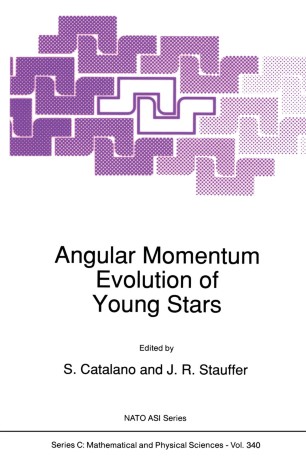 This book reports the Proceedings of the NATO Advanced Research Workshop on "An­ gular Momentum Evolution of Young Stars" held from 17 to 21 September 1990 at Noto, Italy. The workshop had its immediate origin in a discussion about the availability of stel­ lar rotation data, that took place in 1987 at Viana do Castelo Portugal during the NATO meeting, Formation and Evolution of Low Mass Stars. We recognized that nearly 20 years had passed since the last meeting on stellar rotation and that significant progress in the observation of rotation rates in low mass stars had been made. During the last 20 years, new efficient instrumentation (CCD and photon counting de­ tectors and echelle spectrographs) and new analysis techniques (profile Fourier analysis) have allowed us to measure rotational velocities as low as 1-2 km/s and to reach low mass stars in young clusters. Even with these advances, rotational velocities of low mass stars would have remained challenging to determine if all single, low mass stars later than GO had rotational velocities of order or less than 10 km/sec. Evidence that this is not always the case was first provided by the photometric variability data obtained by van Leeuwen and Alphenaar for K dwarfs in the Pleiades and more recently by the vsini measurements of low mass stars in several young clusters.