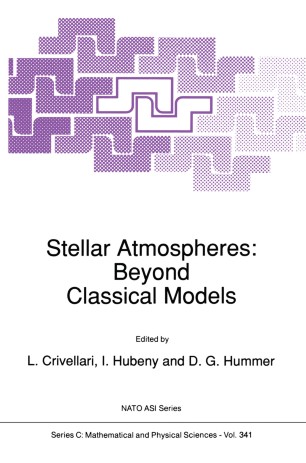 The theory of stellar atmospheres is one of the most important branches of modern astrophysics. It is first of all a major tool for understanding all aspects of stars. As the physical properties of their outer layers can now be found with high precision, firm conclusions can be drawn about the internal structure and evolution of stars. Moreover, improvements in our knowledge of the chemical composition of stars is shedding new light on the chemical evolution of galaxies and of the Universe as a whole. Because the outer layers of stars are among the best-understood astrophysical objects, the theory of stellar atmospheres plays an important role in the study of many other types of objects. These include planetary nebulae, H II regions, interstellar matter, and objects of interest in high-energy astrophysics, such as accretion disks (close binaries, dwarf novae, cataclysmic variables, quasars, active galactic nuclei), pulsar magnetospheres, and Seyfert galaxies. Finally, as stars provide a laboratory in which plasmas can be studied under more extreme conditions than on earth, the study of stellar atmospheres has strong connections with modern physics. Astronomical observations provided a vital stimulus in the early stages of quantum theory and atomic physics; even today topics such as low-temperature dielectronic recombination develop hand in hand with the interpretation of stellar and nebular spectra. Early work on MHD was similiarly motivated. Many such connections remain to be explored.