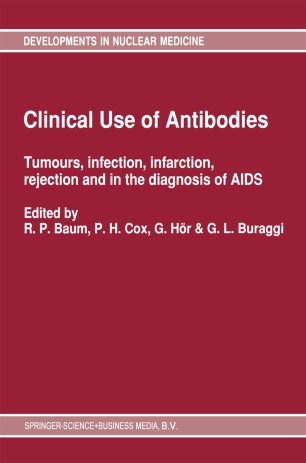 Clinical Use of Antibodies

Tumours, infection, infarction, rejection and in the diagnosis of AIDS

It was at Frankfurt/Mainin 1899 that Paul Ehrlich first expounded his famous "site-chain theory" -which described the basic immunological principal of antibody-antigen interactio- on the occasion of the opening of the Institute for Experimental Therapeutics (which was later named after him). Nearly 100 years have passed since, and in retrospect it can be said that the "Ehrlich Era" (first steps in immunology "Magic Bullet" concept) and the "Behring Era" (detection of antibodies and serum therapy) formed the essential basis in the development of immunology. Niels K. Jerne, the former director of the Paul Ehrlich Institute in Frankfurt/Main received, together with Georges Kohler and Cesar Milstein, the Nobel Prize in Medicine 1984. These late successors of Ehrlich and Behring first described the hybridoma technology (in 1975) which enabled one of the most important and revolutionary technological innovations in the field of immunology -the production of monoclonal antibodies. It happens that, the time of the publication of this book, just a decade has passed since the first use of radiolabelled monoclonal antibodies in man (by the Lausanne Group). Over these 10 years a tremendous progress has taken place in the field of immunoscintigraphy:A large panel of highly specific monoclonal antibodies against tumour-associated antigens as well as normal cell compounds have been developed. Enormous progress has been made in the field of radiolabelling -from iodine-131 to technetium-99mor even positron-emittingradionuclides, e. g. iodine-124.