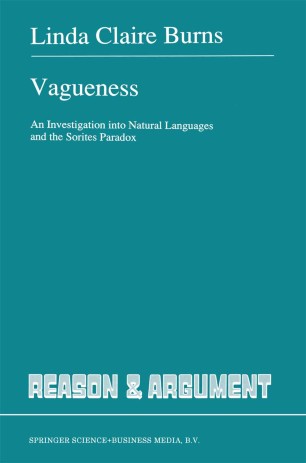 An Investigation into Natural Languages and the Sorites Paradox

Part of the Reason and Argument book series (REAR, volume 4)

This work is in two parts. It began as a general investigation of vagueness in natural languages. The Sorites Paradox came to dominate the work however, and the second part of the book consists in an discussion ofthat puzzle and related problems. The first part contains a general discussion ofthe nature ofvagueness and its sources. I discuss various conceptions of vagueness in chapter 1 and outline some of the problems to do with the conception of vagueness as a linguistic phenomenon. The most interesting of these is the Sorites paradox, which occurs where natural languages exhibit a particular variety of borderline case vagueness. I discuss some sources of vagueness of the borderline case variety, and views of the relation between linguistic behaviour and languages which are vague in this sense. I argue in chapter 2 that these problems are not to be easily avoided by statistical averaging techniques or attempts to provide a mathematical model of consensus in linguistic usage. I also consider in chapter 3 various approaches to the problem of providing an adequate logic and semantics for vague natural languages, and argue against two currently popular approaches to vagueness. These are supervaluation accounts which attempt to provide precise semantic models for vague languages based on the notion of specification spaces, and attempts to replace the laws ofclassical logic with systems offuzzy logic.