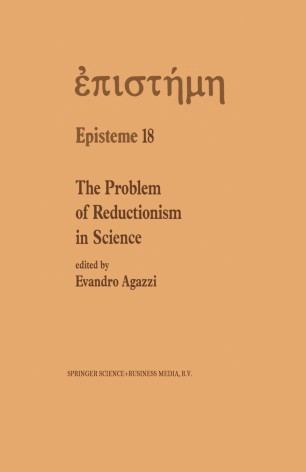 The Problem of Reductionism in Science

Colloquium of the Swiss Society of Logic and Philosophy of Science, Zürich, May 18–19, 1990

The topic to which this book is devoted is reductionism, and not reduction. The difference in the adoption of these two denominations is not, contrary to what might appear at first sight, just a matter of preference between a more abstract (reductionism) or a more concrete (reduction) terminology for indicating the same sUbject matter. In fact, the difference is that between a philosophical doctrine (or, perhaps, simply a philosophical tenet or claim) and a scientific procedure. Of course, this does not mean that these two fields are separated; they are only distinct, and this already means that they are also likely to be interrelated. However it is useful to consider them separately, if at least to better understand how and why they are interconnected. Just to give a first example of difference, we can remark that a philosophical doctrine is something which makes a claim and, as such, invites controversy and should, in a way, be challenged. A scientific procedure, on the other hand, is something which concretely exists, and as such must be first of all described, interpreted, understood, defined precisely and analyzed critically; this work may well lead to uncovering limitations of this procedure, or of certain ways of conceiving or defining it, but it does not lead to really challenging it.