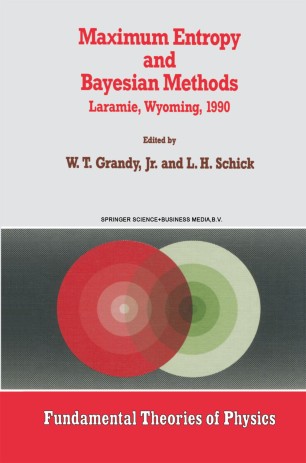 The 10th International Workshop on Maximum Entropy and Bayesian Methods, MaxEnt 90, was held in Laramie, Wyoming from 30 July to 3 August 1990. This volume contains the scientific presentations given at that meeting. This series of workshops originated in Laramie in 1981, where the first three of what were to become annual workshops were held. The fourth meeting was held in Calgary. the fifth in Laramie, the sixth and seventh in Seattle, the eighth in Cambridge, England, and the ninth at Hanover, New Hampshire. It is most appropriate that the tenth workshop, occurring in the centennial year of Wyoming's statehood, was once again held in Laramie. The original purpose of these workshops was twofold. The first was to bring together workers from diverse fields of scientific research who individually had been using either some form of the maximum entropy method for treating ill-posed problems or the more general Bayesian analysis, but who, because of the narrow focus that intra-disciplinary work tends to impose upon most of us, might be unaware of progress being made by others using these same techniques in other areas. The second was to introduce to those who were somewhat aware of maximum entropy and Bayesian analysis and wanted to learn more, the foundations, the gestalt, and the power of these analyses. To further the first of these ends, presenters at these workshops have included workers from area. s as varied as astronomy, economics, environmenta.