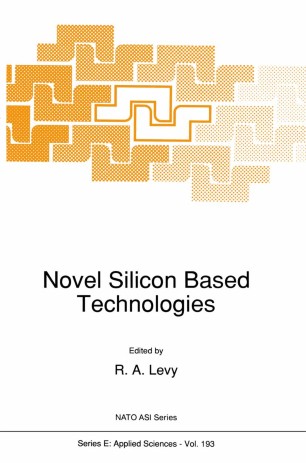 Silicon, as an electronic substrate, has sparked a technological revolution that has allowed the realization of very large scale integration (VLSI) of circuits on a chip. These 6 fingernail-sized chips currently carry more than 10 components, consume low power, cost a few dollars, and are capable of performing data processing, numerical computations, and signal conditioning tasks at gigabit-per-second rates. Silicon, as a mechanical substrate, promises to spark another technological revolution that will allow computer chips to come with the eyes, ears, and even hands needed for closed-loop control systems. The silicon VLSI process technology which has been perfected over three decades can now be extended towards the production of novel structures such as epitaxially grown optoelectronic GaAs devices, buried layers for three dimensional integration, micromechanical mechanisms, integrated photonic circuits, and artificial neural networks. This book begins by addressing the processing of electronic and optoelectronic devices produced by using lattice mismatched epitaxial GaAs films on Si. Two viable technologies are considered. In one, silicon is used as a passive substrate in order to take advantage of its favorable properties over bulk GaAs; in the other, GaAs and Si are combined on the same chip in order to develop IC configurations with improved performance and increased levels of integration. The relationships between device operation and substrate quality are discussed in light of potential electronic and optoelectronic applications.

'The book would be a valuable addition to any library and to all industries involved with very large-scale integration process technologies.' J. of Minerals Metals and Material Soc. Aug 1992