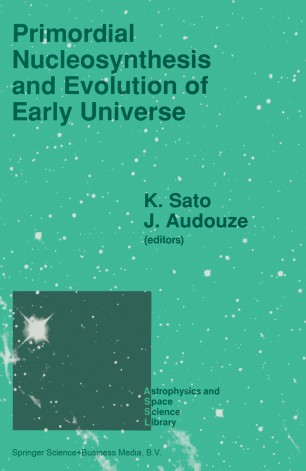 The International Conference "Primordial Nucleosynthesis and Evolution of Early Universe" was held in the presence of Prof. William Fowler on 4 - 8 September 1990 at the Sanjo Conference Hall, the University of Tokyo. This conference was co-sponsored by IUPAP, the International Union of Pure and Applied Physics, and by the University of Tokyo. The number of participants was 156, 58 from 15 foreign countries and 98 from Japan. About 120 contributions were submitted orally or as posters. Originally this conference was planned as a small gathering on Primordial Nucleosynthesis as indicated in the title, since primordial nucleosynthesis is the most important probe of the early stage of the universe. As is well known, light element abundances strongly depend on the time evolution of temperature and density. In this sense we can say that primordial nucleosynthesis is both the thermometer and speedometer of the early universe. Moreover, recently it has been claimed that primordial nucleosynthesis is an indicator of inhomogeneity of the early universe too. Now research of the primordial nucleosynthesis is in a boom. We, however, decided to include observational cosmology, of observations. taking into account the recent remarkable results Nowadays, to reveal the large scale structure of the universe and discover its origin is a main subject in cosmology. We invited distinguished scientists from all over the world, and very fortunately almost all these people accepted to attend this conference.