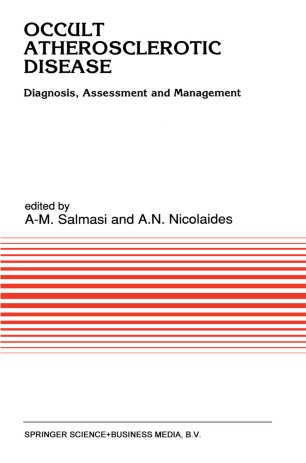 Occult atherosclerotic diseases impose great challenges in the cardiovascular practice. Although their pathology is not much different from that of the overt group of diseases, the clinical approach to their diagnoses remains a puzzle. This has mainly emerged as a result of the problems faced in trying to pick up the vulnerable subjects from among the general public. More definitive candidates to be evaluated are those belonging to one of the high risk groups. There are no statistical figures available on the incidence of occult atherosclerotic disease in the "non risky" general public and this is definitely an area that needs further investigation. Atherosclerotic disease whether they are in the cerebral, coronary, renal or lower limb arteries are theoretically interrelated because the basic patho­ logical changes are usually similar. However there still remain some differ­ ences which are mainly due to variation in the flow pattern in the arteries. Thus it will be important clinically and from the management point of view to investigate for the presence of occult disease in other arteries if an atherosclerotic disease in a certain artery has been discovered. This approach is of a great significance especially from the preventive point of view in order to avoid catastrophic events which may have resulted from pathology in the other region.