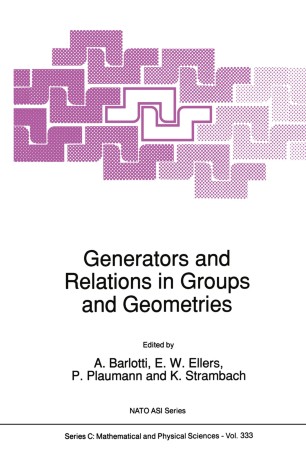 Generators and Relations in Groups and Geometries

Every group is represented in many ways as an epimorphic image of a free group. It seems therefore futile to search for methods involving generators and relations which can be used to detect the structure of a group. Nevertheless, results in the indicated direction exist. The clue is to ask the right question. Classical geometry is a typical example in which the factorization of a motion into reflections or, more generally, of a collineation into central collineations, supplies valuable information on the geometric and algebraic structure. This mode of investigation has gained momentum since the end of last century. The tradition of geometric-algebraic interplay brought forward two branches of research which are documented in Parts I and II of these Proceedings. Part II deals with the theory of reflection geometry which culminated in Bachmann's work where the geometric information is encoded in properties of the group of motions expressed by relations in the generating involutions. This approach is the backbone of the classification of motion groups for the classical unitary and orthogonal planes. The axioms in this char­ acterization are natural and plausible. They provoke the study of consequences of subsets of axioms which also yield natural geometries whose exploration is rewarding. Bachmann's central axiom is the three reflection theorem, showing that the number of reflections needed to express a motion is of great importance.