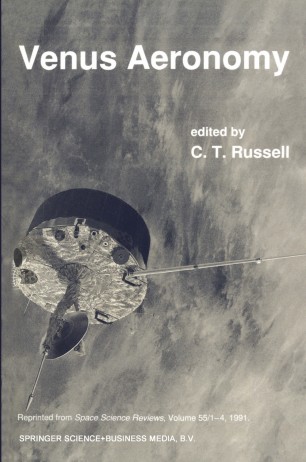 For almost three decades since Mariner 2 flew by the planet in December 1962, Venus has been the subject of intense investigation by both the Soviet and American space programs. Since the intrinsic magnetic field of Venus is exceedingly weak, if it exists at all, we expect many phenomena of the upper atmosphere and ionosphere of Venus to differ from their terrestrial counterparts. While flybys and landings of the many Venus missions provided useful data on these phenomena, orbital missions were needed for their detailed investigation. Such orbital missions were provided by the Soviet program with Veneras 9 and 10 in October 1975 and by the United States with the Pioneer Venus Orbiter in December 1978. Originally designed for a prime mission of only 243 days, the Pioneer Venus Orbiter is still functioning over a decade later, providing data nearly - hours a day through one of the most active solar cycles to date. We expect these transmis­ sions to continue until September 1992 when gravitation perturbations will lower the periapsis of the PVO orbit so that the spacecraft will be lost to the atmosphere. The Venera 9 and 10 and the Pioneer Venus observations have led to an explosion of knowledge about the upper atmosphere and ionosphere of Venus and their interaction with the solar wind. The availability of data over a full solar cycle has.