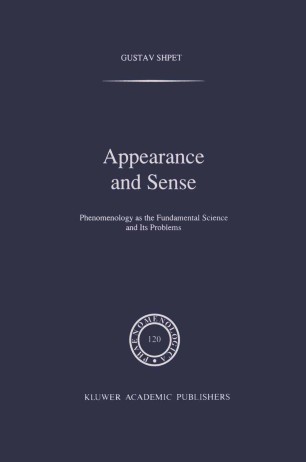 Phenomenology as the Fundamental Science and Its Problems

Despite, or perhaps better by virtue of, its very brevity, Appearance and Sense is a difficult text to read and understand, particularly if we make the attempt independently of Husserl's Ideas I. This is certainly at least in part owing to the intent behind Shpet's work. On the one hand it strives to present Husserl' s latest views to a Russian philosophical audience not yet conversant with and, in all likelihood, not even aware of, his transcendental idealist turn. With this aim any reading would perforce be exacting. Yet, on the other hand, Shpet has made scant concession to his public. Indeed, his text is even more compressed, especially in the crucial areas dealing with the sense-bestowing feature of consciousness, than Husserl' s own. For all that, Shpet has not bequeathed to us simply an abbreviated paraphrase nor a selective commentary on Ideas I, although at many points it is just that. Rather, the text on the whole is a critical engagement with Husserl' s thought, where Shpet among other things refonnulates or at least presents Husserl's phenomenology from the perspective of hoping to illuminate a traditional philosophical problem in a radical manner. Since Husserl's text was published only in 1913 and Shpet's appeared sometime during 1914, the latter must have been conceived, thought through, and written in remarkable haste. Indeed, Shpet had already finished a first draft and was busy with a revision of it by the end of 1913.