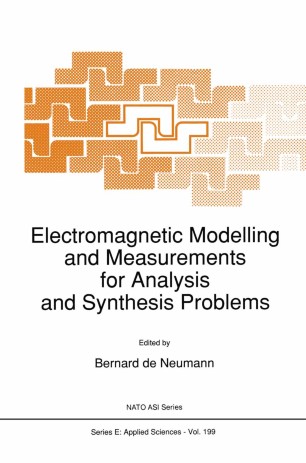 Electromagnetic Modelling and Measurements for Analysis and Synthesis Problems

In this volume is presented the proceedings of a NATO Advanced Study Institute (ASI) on the theme of Electromagnetic Modelling and Measurements for Analysis and Synthesis Problems. The ASI was held at 11 Ciocco, Castelvecchio Pascoli, Tuscany, Italy, August 10th - 21st, 1987. It has been my good fortune to act as co-director of two of Jozef's previous ASIs, and so I am well acquainted with the JKS format for ASIs. As participants will realise, I did not attend this ASI, and so I only have a partial appreciation of the programme. In particular it has not been possible to include transcripts of any panel discussions which may have taken place. Readers may recall that such transcripts have formed a most interesting and useful part of previous ASI proceedings edited by Jozef Skwirzynski, and helped to convey the spirit of the meetings. Unfortunately it has proved impossible to locate the tapes, despite the best efforts of Jozef's assistant, Barry Stuart. A further dificulty has arisen through the untimely death of Jozef's former deputy and colleague at GEC Research, Ed Pacello, who assisted Jozef with the organisation of the precursor of this ASI. The following is taken from original material relating to the aims of the Advanced Study Institute: "PURPOSE OF THE INSTITUTE This Institute is concerned with computer modelling and with experimental measurements as two complementary tools for both analysis and synthesis of electromagnetics (EM), infra-red (IR) and optical problems.