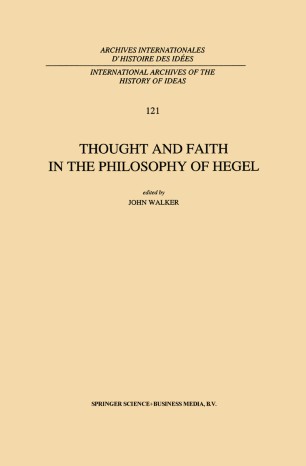 Thought and Faith in the Philosophy of Hegel

The purpose of this collection of papers is to introduce English­ speaking philosophers and theologians to something of the variety of the contemporary debate about the religious relevance of Hegel's thought. It is published in the hope that it will appeal not only to specialised students of Hegel's Philosophy of Religion but to a wide audience of scholars interested in Hegel's thought as a whole. The volume grew out of the 1987 Oxford conference on Thought and Faith in the Philosophy of Hegel, but has since developed beyond the confines of the original conference programme. The programme of the conference consisted of five major papers on different aspects of Hegel's religious thought and its reception, followed by a somewhat shorter commentary delivered by another scholar in the same field. This basic format has been retained, but a number of the commentaries have been extended or rewritten and an entirely new piece by Kurt Meist has been commissioned for the purpose of this collection. The volume includes studies of the Lectures on the Philosophy of Religion and the Phenomenology, as well as pieces dealing with the theological relevance of Hegel's philosophy of history and Kierkegaard's attack on Hegel. It con­ cludes with an examination of the relevance of Hegel's doctrine of absolute Spirit to the modern defence of his philosophy as a whole.