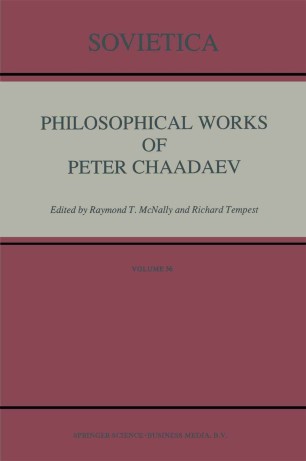 Peter Chaadaev emerges from the pages of history as one of Russia's most provocative and influential thinkers. The purpose of this book is to present the reader with the fIrst English translation of most of his philosophical writings. During the first half of the nineteenth century Chaadaev incited a violent polemic concerning the historical significance of Russian culture. His ideas concerning Russia's real mission in the world still provoke controversy in the Soviet Union. In fact, no edition of most of his works has ever been published in the Soviet Union until the Gorbachev era. Our English translation with commentaries was done in the conviction that these writings should be made available to the English-reading public. The background material in this book is expository; we have not attempted to write a complete biographical study of Chaadaev, nor have we tried to offer an analysis of Chaadaev's philosophy. The point of view is simply that of two scholars who admire Chaadaev's insights into philosophy in general, and the philosophy of history, in particular; so the background material has ·been limited to a biographical sketch of Chaadaev and a brief explanation of his major ideas.